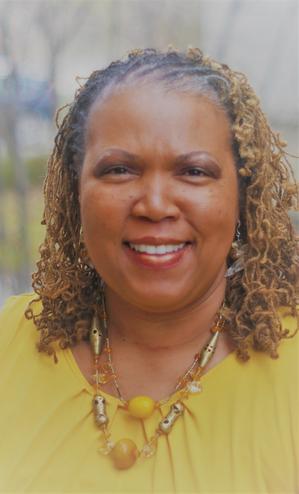 Rev. Dr. Stephanie Buckhanon Crowder is a noted scholar, versatile speaker, and prolific author who relishes in the worlds of theology, pop culture, and Bible. She is the first woman and first African American to hold the position of Vice President of Academic Affairs/Academic Dean at Chicago Theological Seminary. She is also the first African American woman promoted to Full Professor at CTS.  A native of Memphis, TN, she graduated in the top ten of Central High School and furthered her studies at Howard University, where she earned a Bachelor of Science degree, summa cum laude, in Speech Pathology/Audiology.  Stephanie was the Student Commencement Speaker at her college graduation.

While at Howard, Stephanie was active in the Golden Key National Honor Society and president of the Frederick Douglass Honor Society.  She was a Who's Who Among Students in American Colleges and Universities Honoree.  She has contributed to her community as a National Youth Spokesperson for United Way and as a member of the March of Dimes National Youth Council and the Board of Directors of NashvilleREAD. After completing a term on the Disciples of Christ National Convocation Board of Trustees, she was an active member of its Division of Overseas Ministries Board for seven years.

Following her undergraduate studies, Stephanie entered United Theological Seminary in Dayton, OH.  At United, she served as Vice-President of the African American Seminarians' Caucus.  She was Research Assistant to the President and Managing Editor of Setting Captives Free, United’s African American Ministries newsletter.  In addition she earned the Anderson Theology Award for her scholarly writing and was recognized for her honors work in preaching and Greek.  She received a Master of Divinity degree in May 1994.

Stephanie was licensed by Metropolitan Baptist Church (Washington, D.C.) and ordained by her home church, Friendship Baptist (Memphis, TN). She was on staff at Mississippi Blvd. Christian Church (Disciples of Christ) as Asst. Minister/Christian Education.  Stephanie served as the Christian Church in Tennessee (Disciples of Christ) Associate Regional Minister for Women’s Ministries, and was Associate Pastor of New Covenant Christian Church (Nashville, TN) for fifteen years.  She and her husband co-founded The Empowerment Church (Nashville, TN). As Project Director of MICTAN, she provided HIV/AIDS training to congregations throughout the United States.

In May 2000 Stephanie earned her Doctor of Philosophy degree in Religion (New Testament) from Vanderbilt University. She was a 1999-2000 Fund for Theological Education Dissertation Fellow as well as a 2002-03 Fellow for the Wabash Center for Teaching and Religion.  Her published dissertation is Simon of Cyrene: A Case of Roman Conscription. She has also published in The African American Pulpit and Lectionary,Women at the Well: Volume 2, The Chalice Introduction to the New Testament and The Peoples’ Bible.  Her work on the Gospel of Luke can be found in True to Our Native Land: An African American New Testament Commentary. Additionally she has essays in Soundings in Cultural Criticism: Perspectives and Methods in Culture, Power, and Identity in the New Testament, Matthew:Texts@Contexts, and Parenting as Spiritual Practice and Source of Theology.

Stephanie wrote A Faith-Based Curriculum for Addressing Substance Abuse for the Congress of National Black Churches. She has authored numerous resources related to faith and health in addition to writing various devotional guides. Many of her sermons have appeared in a local newspaper, The Tennessean. She addresses pop culture in her blogs for Church Anew and formerly with Inside Higher Education and The Huffington Post.

As a student of the Bible and/in society, Stephanie provided scholarly commentary for the  A.D. Bible television series in collaboration with Urban Ministries, Inc. She ponders social media and theology in “Thinking Socially” from Thinking Theologically (Fortress Press, 2015). She has served on the Editorial Boards of ON Scripture, a pop culture online commentary, and Feasting on the Gospels. Stephanie was recently elected to serve on the Society of Biblical Literature Council, the executive arm of this professional guild.

Stephanie writes on the spiritual benefits of yoga in the Disciples Women magazine. She partners New Testament themes with R and B music in Afrocentric Interpretations of Jesus and the Gospel Traditions (Mellen Press). Furthermore, her second book, When Momma Speaks: The Bible and Motherhood from a Womanist Perspective, triangulates Black mothers, pop culture, and biblical stories (Westminster/John Knox Press). She participated in a 2016-2018 Wabash Center project on the taxation of African American mothers in the academy. Her latest writing project is Are You for Real? Imposter Syndrome, Theology, and Society (Cascade Books).

Stephanie was a Louisville Institute Summer Grant recipient and is a member of the Society for the Study of Black Religion, the Society of Biblical Literature and a founding member of the Society of Race, Ethnicity, and Religion. She has previously taught at Fisk University, American Baptist College, Belmont University, Shaw University Divinity School, Mid-America Center for Ministry and McCormick Theological Seminary. Stephanie was a member of the 45th Commemorative Board of Urban Ministries, Inc. She was a 2017 Inductee into the Morehouse College Martin Luther King, Jr. Collegium of Scholars. Also in 2017 Stephanie was Keynote Lecturer for the 103rd Hampton University Ministers' Conference. Most recently Stephanie was selected as a member of the 2022 HBCU Executive Leadership Institute Community of Fellows. She is a much sought after preacher, lecturer, author, workshop leader, and facilitator.

Stephanie is married and a proud #WomanistMomma of two sons.